Hi Loves!  One way I was thinking I could save money is by trying a new razor that is considerably less expensive than my current favorite – my Venus Swirl.  I realize that I’m a bit of a razor snob.  For example – I really love 4 or 5 blade razors.  Those single blade, or two blade ones from high school make me cringe at the number of nicks and cuts I used to get.  Please tell me I’m not the only girl to have shaving scars around my ankle bone?!   20 years later and I can still see one! 😮

A friend of mine has used Dollar Shave Club (DSC), and Harry’s.  I’d heard of DSC but had no idea who or what Harry’s is!  They’re pretty similar companies.  Both subscription services and they are WAY cheaper than my swirl refills.  I thought this would be a perfect follow up to my most popular blog post to date (Battle of the Razors) but could be a much cheaper alternative.  I ordered both on the same day and about a week later, both arrived on the same day.

Before we dig in to DSC & Harry’s – here’s what they need to replace. 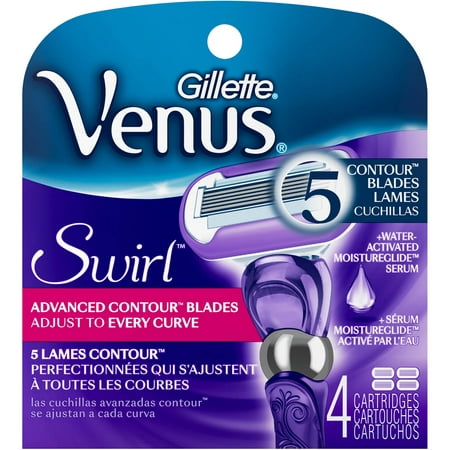 First – these are $5.25 a refill without a coupon.  While I love the 5 blades and sometimes with a coupon you can score a deal even then, the two options below are considerably cheaper.  Since the venus swirl has been around for a while – I’m not reviewing that but I do love the handle and the ball that gives it more movement around knees and ankles. I’ve always loved my Venus razors since the original 3 blade one I got in college 10+ years ago!  Now that you know what I like – lets get into the two contenders in this battle!

Introducing Dollar Shave Club – 4 Blade Razor Option $6/box – See my thoughts below!
Click the link to learn more. *That is an affiliate link*

This is your new razor. And it’s also your girlfriend’s new razor. Or your boyfriend’s. You see, the 4X is also known as the Lover’s Blade. It was designed to satisfy the harshest critics of both genders, so you can share your subscription (but not your blades, gross) with someone you care about. It’s equally good for the face, legs, armpits, or anything else.

A more advanced all around shaver that gets right down to business.

My initial thoughts:
First off I liked the feel of the handle.  I thought it would be easy to maneuver in the shower.  I shave 99% of the time in the shower and its important to me to have good control of the razor when my hands are wet.  I also like that you get 4 refills from the start for $6.  The packaging was average but not a deal breaker and the “handbook” was a fun little newspaper that tells you about the razor.  It also includes a sample of their shave butter.

I chose the “girlfriend blade” or Lovers Blade since it has 4 blades.  I almost went with the 6 blade option but I knew I’d never use the single trim blade on one side.  That box is $9 and is known as the executive.

I get into the shave details in the battle below!  (Keep reading!)

About it:
Truman Set $15 – My choice and most popular
5 German blades. Flex hinge. Lubricating strip. Precision trimmer.
Everything you need for a close, comfortable shave: sharp, durable blades, a flex hinge, a lubricating strip, and a precision trimmer for your sideburns and hard-to-reach places like under your nose.

The Truman handle is designed with a rubberized matte exterior, texturized grip pattern, and weighted core for maximum grip and control. It may be the best-looking thing in your bathroom (other than you.)  Comes in 3 color choices.

Also available is a Winston Set for $25
The biggest difference is a different handle.  The ergonomic body is made of die-cast zinc and polished chrome for a handsome finish and a rubberized grip for optimal control. For a more personalized experience, get it engraved.

My initial thoughts:
Immediately I loved that I could pick a color.  I like options and making something my own.  You can pick from orange, navy, or green (olive looking).  Harry’s also wins – hands down – in packaging.  Their box was bigger but also had a better presentation.  Not that it matters to most people but as a marketing nerd I appreciate touches like that.

I was a bit skeptical of the handle and didn’t realize that it had a trim blade.  Trim blades aren’t necessary for me and I was initially worried I’d accidentally cut myself with it.  While I was nervous about that extra blade – I LOVED the cover they include for traveling.  I hate having to attempt drying my razor before packing it up.  This was a delightful surprise to me.

The Battle – How did they do?!

To give each a fair shot at challenging my Venus Swirl, I did three tests outlined below. I used DSC on my left side, and Harry’s on my right side (shaving armpit & leg).  I left this the same for each test to ensure that I’ve giving each razor an equal chance. I also did each test in the shower since thats where I shave the most and each time I shaved towards the end of my shower so the hair was also softer. Which I always do.
First Test – Each razor with the shave product included.
Second Test – Each razor using my EOS Shave Lotion.
Third Test – Each razor using Gilette Shave Gel.

For the first battle I used the shave products that came with both.  DSC included their shave butter, and Harry’s sent a shave gel.  I wanted my first test to include their own shaving products to get what I thought would be the ideal way to test each one out.
This first test was pretty good.  Both shaved wonderfully, the handles felt nice, and the shave products worked fine.

If you try the shave butter – one thing that annoyed me is that its clear.  When shaving in the shower, at night, and you don’t have a light actually in your shower, its hard to tell where you shave and where you didn’t.  Minor detail – if you’re a guy this wouldn’t be nearly as annoying I’m sure but none the less I wanted to mention it.  The Harry’s gel is faintly scented and worked just fine.  In fact a quarter sized amount went much farther than I thought it would.

The winner of the first battle was Harry’s.  Simply because I felt it was a teeny tiny bit closer of a shave.  DSC also had a bit of a “drag” to it.  Not in a bad way, I just felt it pull more as I used it than Harry’s did.

I need to preface by saying that in the past I hated shave lotions.  I thought they were worthless and would pick a gel any day.  This summer my underarms got extremely irritated by a deodorant.  I was looking for something gentle and moisturizing.  I gave this a go and was surprised by how much I like it.  It does seem to clog up razors and I find myself spending more time rinsing it out of the blades but I can deal.

This time around I used the razors but tried a product that I always shave with.  This would be the first true test since I always use my swirl with the shave lotion.  Both worked just fine but DSC still has some pull or drag to it.

The winner of the second battle was Harrys.

I just mentioned how much I like shave gel’s and prior to using the EOS, I always had a shave gel in my shower. Venus branded gel from Gilette is my all time favorite.  (Especially the one with Olay in it!)  Since I learned how the two razors stacked up against the shave lotion, I thought it was only fair to give one final test with a shave gel.

This time around DSC felt a bit duller than Harry’s and still pulled at the skin.  I do have one strike against Harrys.  I caught the trim blade against the back of my knee. I thought I nicked the skin but it turned out to be just a scrape.  I was in a hurry and it was more my fault than the razor but I wanted to mention that it did happen!

So – three tests later – I’m sure you can guess my pick!

If you made it this far – thank you for sticking around!  When I was looking into trying this I didn’t find very many reviews that put the two brands DSC & Harry’s head to head.  When jumping into trying new things and actually telling you all about them, I like to be pretty thorough but you know that by now!  I have used the razors for about a month and to be honest – they are very close.  So close I have to nit-pick to get a true winner.

The winner of this battle for me is Harry’s.  (by a hair! – pun totally intended) 🙂
Don’t get me wrong, I liked DSC and will use it and the refills.  But when it comes time to actually purchase new blades, I’m going to spend the extra $.30 a blade and get Harry’s.

Have you tried any of these brands?  What is your favorite razor?  Are you a shave lotion or shave gel person?  I’d love to hear what you use!

2 thoughts on “Frugal Friday – Battle of the Razors #2 – Dollar Shave Club vs. Harry’s vs. Venus Swirl”