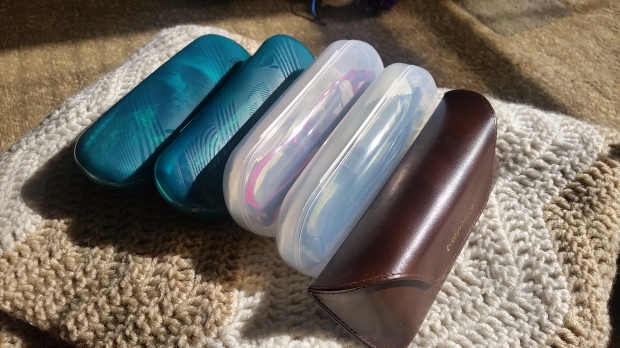 Hi Loves!  Last week I told you about how I’d ordered cheap glasses online.  Well – maybe inexpensive is a better way to put that?! 🙂  Regardless – 5 pairs combined were considerably cheaper than new frames for my current pair.

So how does ordering online work?  Pretty simple but not without its issues if you aren’t careful.  You’re able to upload a picture so you can see what the shape would look like on your face BUT the frames aren’t to scale so you have to watch the measurements.  Its pretty simple but I’d just highly suggest that you read up on what you’re getting so it has a better chance at being a good fit.

The first thing I did is took my current pair of glasses and I measured how wide they are, how long the side (ear pieces) are, and the size of the lenses.  This gave me perspective to know if the pair I was considering would be too big or two small.  The last thing I wanted was to order a pair that I wouldn’t wear or like.

Here are the glasses I ordered.  From the top down (in reverse order of how I ordered them)  Zenni Optical, 2 pair from Goggles4U, Eyebuy Direct, Zenni Optical. 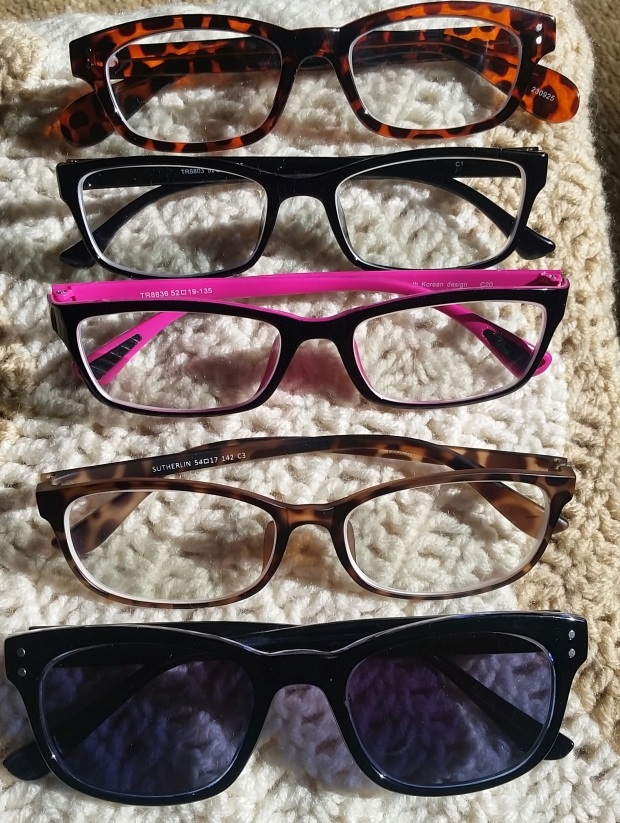 In the nature of full disclosure I’ll share how much I spent at each site.  I opted for anti-reflective coating on all of my glasses since I work with computers so much.  You can use a coupon code (FREEAR) at Zenni so its at no charge.  The other sites had a small fee but since eye strain happens for me easily – it was worth a couple extra dollars.  There are also coupon codes for each.  The only one currently still active was FREEAR at Zenni but google coupon codes for the site you’re interested in – there were some at each that might work better for you.
Zenni – $16.90 (paid extra for tinted lenses to make sunglasses)
Eyebuy Direct – $21.91 (I added on a better case and screwdriver kit)
Zenni – $11.90 (regular frames & lenses)
Goggles4u – $17.85  (I got 2 pair with anti-reflective lenses or $8.93 a pair)
TOTAL FOR 4 pairs of glasses and 1 pair of sunglasses $68.56

Each pair came with a case, all are hard plastic except for eyebuy direct.  Each also came with a lens cloth, however the cloth from Goggles4U is pretty wimpy, the others are actually pretty nice and I’ve used them several times.

So did I need 5 pairs of glasses.  No – in fact, it was a bit silly of me.  However in the nature of doing a solid post – I wanted to test drive the four companies mentioned and let you know how things went.  The first two on my list were ordered in June, but the bottom two were ordered in September.  I can tell you that the bottom two were ordered on the same day.  Goggles4u arrived 2 days earlier but both were in my hands within 2 weeks.  If you break your glasses and you need something ASAP…this might not work, but hey, now I have 4 back up pair! 🙂

Lastly – what if you order some and you’re not happy or there is an issue with the prescription?  Reach out to the customer service of each. A friend of mine did the BOGO at goggles4u and they sent him the wrong prescription.  He contacted them, got to pick 2 new sets of frames and the fixed it for him for free.  Each site seemed to have really good customer service and return policies, don’t be afraid to ask.  At the very least get a refund.

Come back next week and I’ll let you know which store I like the most and my thoughts since I’ve had these for a few weeks.